On April 22, we will celebrate the fiftieth anniversary of the first Earth Day held in 1970. I was one of the organizers of that world-transformative event, and I’ve written a book to commemorate it, You Can’t Fool Mother Nature: The Once and Future Triumph of Environmentalism.

(The book is available on Amazon. To check it out, click HERE)

This is not another gloom and doom book about catastrophic climate change. It’s new and different. How so? In a review, Peter H. Schuck, Professor Emeritus at Yale Law School, describes how:

“Bold, upbeat, and witty — but behind the drollery, Kennard is shrewdly advocating the pursuit of radical ecological goals through conservative methods, signifying a sea change in thinking about the politics of the environment.”

For their part, environmentalists — mostly left-wing liberals — want no part of “conservative methods.”  To them, these methods constitute a defense of corporate greed and exploitation of nature. Conservative methods are dismissed as a phony rationale for anti-intellectual, anti-science climate denial.

This being the case, where do I get the nerve to publish a book arguing that conservative methods are the best way to pursue radical ecological goals?  Am I looney?

Well, in You Can’t Fool Mother Nature, I demonstrate conclusively that conservative methods and radical ecological goals are not diametrically opposed concepts but happy members of the same family!

Here are five key arguments I make in the book.

(1) Conservative methods rely on organic change — that is, change which is not planned or designed. Organic change occurs on the small-scale, in increments over time, and in wholly decentralized fashion. Organic change emanates from the bottom up, not from the top down. Now, it so happens, this is the way Mother Nature changes things. Accordingly, I argue, when we strive to protect and restore natural systems, it should be through organic change.

(2) Conservative methods rely on self-organizing systems. This is how Mother Nature organizes things. Look at how unfathomably complex natural systems — climate, oceans, and forests, for example — have evolved spontaneously to function in optimal, orderly fashion. Self-organizing natural systems are miraculously resilient, bouncing back on their own when they’re disturbed or damaged.

The good news is that self-organizing systems evolve in society too, and like natural systems, they work miraculously. My favorite example is small business, the best economic self-organizing system that exists.(Fortune 500 companies, obviously, have been consciously designed and brought into existence by mere mortals.)

In the book, I argue that — thanks to this family resemblance — self-organizing small businesses are the best tool we have for protecting and restoring self-organizing natural systems.

In my book, I describe the fast-growing entrepreneurial green small businesses that are enveloping the global economy today. All over the world, radical innovators working in alternative energy, water treatment, sustainable agriculture, construction, manufacturing, and transportation are devising products that dramatically reduce energy consumption, pollution, and waste. These upstart clean-tech companies are challenging  and disrupting many large, long-dominant industrial enterprises that are environmentally damaging. And, in the process, they are creating millions of new jobs that are clean jobs.

The example I cite in the book is the fact that in recent decades millions of people around the world — entirely on their own volition — have reduced their consumption of meat or cut it out entirely.

They’ve done this it to save money, to improve and protect their health, and — for many of them — out of concern for the environment. (Growing livestock is one the most environmentally destructive industries in existence.)

Bear in mind that no law has compelled these people to act, and no law could do so. (Remember America’s ill-fated experiment with Prohibition of alcohol?)

(5) Conservative methods include the idea of local production for local use. Now, it so happens that local self-reliance — one of the most cherished conservative principles — is every bit as much a potent formula for environmental protection.

Take, for example, the efforts of environmentalists to promote distributed systems of energy — that is, energy produced on the site where it is used. This is achieved through use of rooftop solar PV units, natural gas turbines, wind turbines, biomass generators and so on.

Here local production for local use aims to achieve energy self-reliance: people can produce the energy they need locally, without dependence on remote, large-scale, centralized systems that may falter or fail. 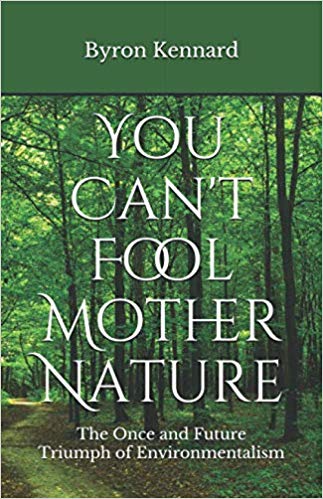 (The book is available on Amazon. To check it out, click HERE)